The Bolivarian Liberation Forces (FBL) is a guerrilla group based in western Venezuela, along the border with Colombia. Unlike traditional insurgencies, the FBL generally supported the government of Hugo Chavez, and avoided confrontations with security forces.

The FBL’s origins are unclear. While some analysts believe the group was founded by a radical leftist faction of the Fatherland for All Party (PPT), the PPT has denied any links to the guerrillas. Others believe that it emerged from the Communist Party of Venezuela (PCV) in the late 1980s.

The FBL first gained prominence in Venezuela in 1992, when it claimed responsibility for several attacks on public officials who were widely perceived as corrupt. The most high-profile of these was the September 1992 assassination attempt against the president of the Venezuelan Confederation of Workers (CTV), Antonio Rios. However, they were not directly involved in Chavez’s failed coup attempt against the government of Carlos Andres Perez that same year.

Ater fading from the limelight during the 1990s, the FBL re-emerged after Chavez was elected in 1999. In 2002, the group distributed flyers declaring support for the president, causing some to suspect that the group was revived with the help of the Chavez administration.  Both the guerrillas and government officials denied this, however, and Chavez himself publicly condemned the FBL’s activities as contrary to his “Bolivarian revolution.”

According to the Venezuelan military, the FBL is led by an individual known as Jeronimo Paz, and a five-member commanding body headed by aliases “Zacarias,” “Macaebo,” “Ernesto Guevara,” “Julian”  and “Carlos Chileno.” Little is known about any of these individuals. 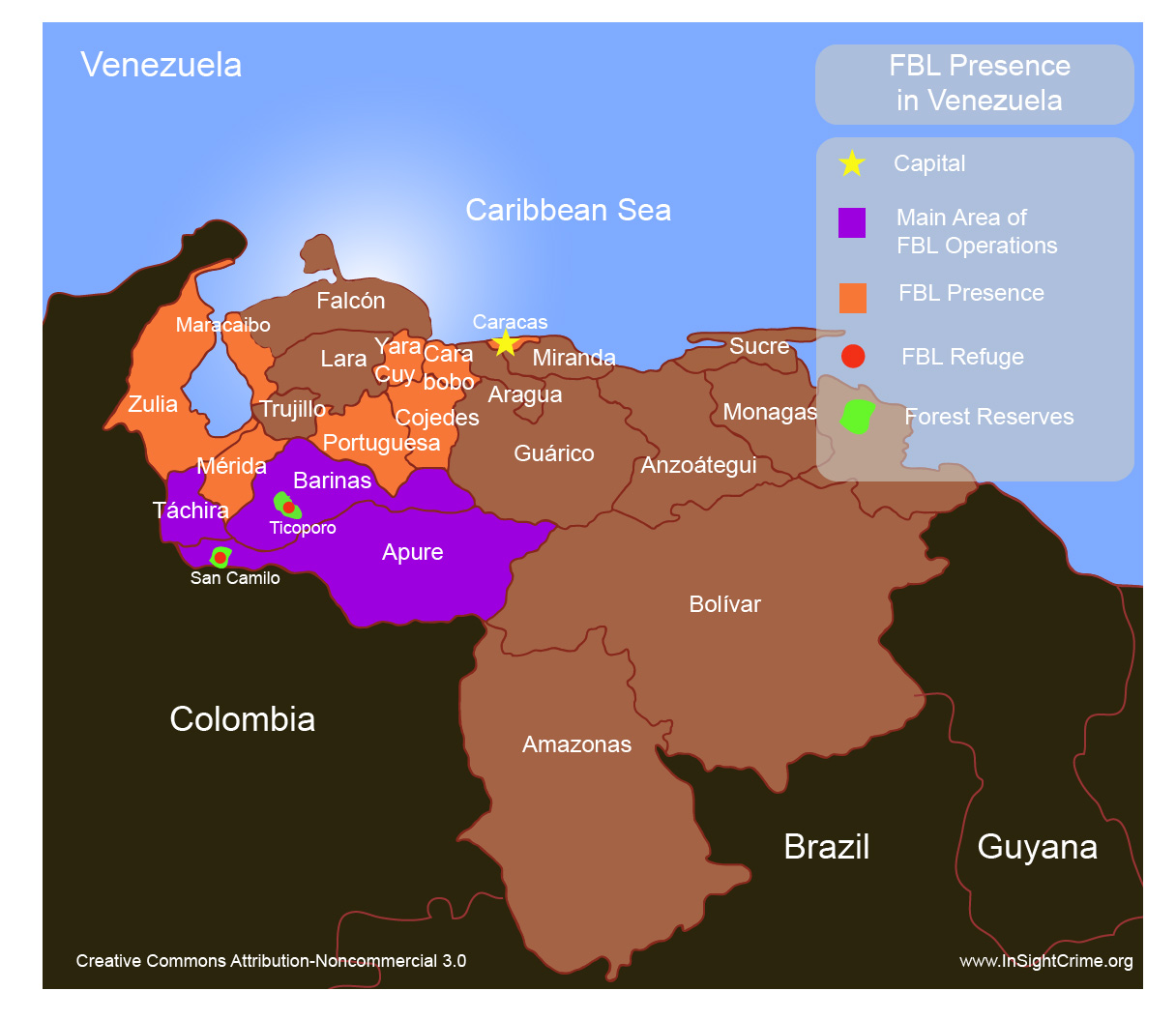 The group is believed to have between 1,000 and 4,000 members, and is active mostly in the western border states of Apure, Tachira and Barinas (see map), although it also has a presence in the western states of Zulia, Merida, Portuguesa, Cojedes and Carabobo as well as in the capital city, Caracas. In Apure and Barinas, the FBL uses the densely forested San Camilo and Ticoporo nature reserves as its main hideouts.

The guerrilla group funds itself mainly by kidnapping and extorting local landowners and businesses along the border with Colombia. In 2011, for instance, the FBL reportedly charged a group of oil workers in Apure a “protection fee” of 110,000 bolivars, or about $25,000.

Its financing activities have at times put the FBL in conflict with Colombia’s National Liberation Army (ELN), which also operates on the border. It has had close relations with the larger Revolutionary Armed Forces of Colombia (FARC), which has provided the FBL with logistical support and training.

The FBL does not currently pose anything like the same security threat in Venezuela as these Colombian rebel groups do in their country. It is largely pro-government, and although there are rumors of an internal division between those who support the leftist government and those who support more radical social change, it has avoided targeting government officials in recent years. This could change, however, with the post-Chavez transition.

– See profile of the FARC in Venezuela

– See profile of the ELN in Venezuela

– See profile of the BACRIMs in Venezuela

InSight Crime is a foundation dedicated to the study of the principal threat to national and citizen security in Latin America and the Caribbean: Organized Crime. We seek to deepen and inform the debate about organized crime in the Americas by providing the general public with regular reporting, analysis and investigation on the subject and on state efforts to combat it.
Want to know more about us?
[related_posts]

The Fentanyl Trade Through Mexico, Explained in 8 Graphs

End of Heroin is Bad News for US Fentanyl Hotbeds

Bulgarian Biochemist in Mexico Gives Glimpse of the Future